I was in San Fran on Wednesday and got to hang out with Reyna, Addie, Josh.... and we happened to run into Kei in Japantown. :3 It was pretty much exceedingly fun! I haven't been to that Nihonmachi in almost ten years, so already it has a somewhat nostalgic look to me. 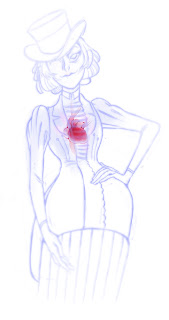 Off-subject briefly: This is Riverside, a former Lady of Questionable Morals who finally retired..... after being shot through a bit in the heart. As a ghost, she's taken up residence in Soho, collecting bizarre and exotic trinkets for her hobby. She's also the tiniest bit addicted to a lovely formula that gives her the sensation of a beating heart (one thing she's missed about being alive..... she doesn't miss much else) which she purchases from our beloved Dr. Jekyll. :3

Inspired by Paris Hilton's character in Repo! The Genetic Opera. I think it's the most awesome thing ever that Paris is in that movie/thing.

Talking came along to the subject of Calarts (well, it would, wouldn't it?) and so of course I've been thinking about returning to school and How I Spent My Summer Vacation--most notably What I Drew On My Summer Vacation.

I haven't really gotten the impression that the school is trying to mold me into some sort of industry standard--but then again, I did come from a Catholic girls' school, where the assumption is that, if you're not being molded into something prim and polite, you aren't getting your money's worth.

The only thing is that I HAVE noticed over the summer that I'm constantly asking myself, "Is this worth drawing? Will this look good in my portfolio? Is this what the studios want to see?" It's really annoying, although I'm hoping it's largely due to what I've perceived as the Second-Year "I hate everything I draw" Syndrome. I guess the question is whether the atmosphere at Calarts has anything to do with it. If it does, then I really didn't feel it while actually at school--I generally thought the message of "we want to encourage personal style" was pretty well-enforced (failing that, people sure SAID it enough). I think the feeling began mostly after portfolio day, when you end up being sorted into "design", "story", or "animation" and you end up making new works with one of those three categories in mind.

My big problem is in design, as I have a much bigger ego about my character designs (er, not in general, but I'm pretty protective of the ones for my four major storylines) than I do about the way I make storyboards or the way I animate (especially how I animate, which is basically "do whatever"). I have a couple industry character design idols (I'm still busy staring at Shane and Shannon's Coraline arts) and in general I tend to prefer character designs made for animation. . . . but it gets to the point where, if I design something that would not be intended for animation, I doubt whether it's any good at all. I feel like I'm wasting my time.

I'm pretty sure that these funny insecurities aren't so much the school's fault as the industry. Um. And more than that, it's the trouble that I don't seem to have quite the ability to overcome whatever "pressures" are out there. Art and animation and story are pretty much my life, but I haven't gotten down to what I really enjoy about it. I just..... do.
Posted by Arythusa at 2:23 PM No comments:

Going to the Special hell 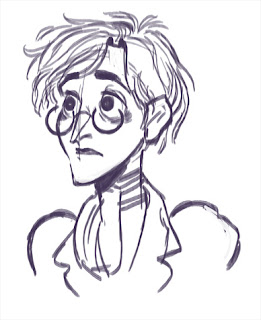 Qui's new persona-character Vincent, whom I promptly stole and turned into some kind of bishounen.
Posted by Arythusa at 11:54 PM 1 comment: 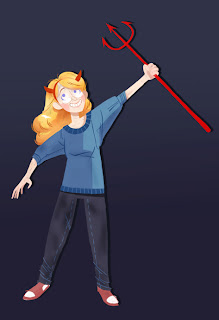 It looks like the major events of summer are all over. Nothing to do but wait for school to start, ne?

Anyway, here's Beatrice Bee (she goes by Bee), ordinary human sent to Hell by mistake. She disguises herself as a demon in order to get home. :P 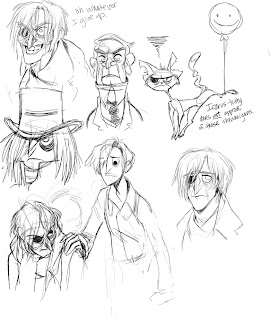 Some fun sketches from an RP I'm doing (yay!). My Jekyll/Hyde playing opposite her Icarus (previously drawn a few posts below). I'm not sure if information regarding Icarus is considered spoileriffic, so I won't say much. :x 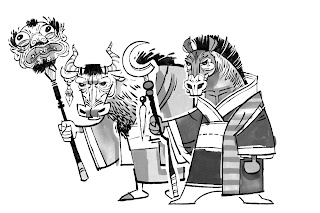 Some Japanese monsters from Hell and I SWEAR that severed head looked better designed before I put it on the stake. *fume* These spirits seem to be called "ox-head" and "horse-head" (for.... obvious reasons) but damned if I can figure out what they're FOR. My understanding of Japanese demons is that every once in a while, someone would go:
"Hey, we haven't made enough creepy-looking crap lately. How about a guy with a mop for a head?"
And they make up the story afterward. 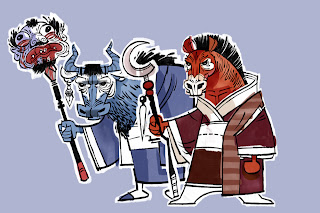 I'm not terribly attached to the colored versions. Since obviously it's the linework that ought to be the focus here, I'm wondering if I should really color them at all.
Posted by Arythusa at 11:12 AM No comments: 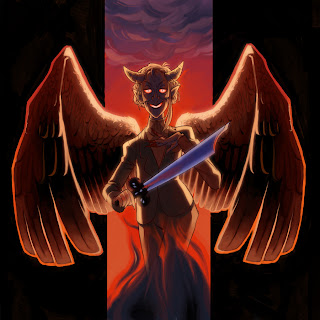 Trying to nail down the look of Ms. M, a powerful hell-demon of the House of Greed. (She's a long-standing character except that I recently made her female because she got boring as a guy.) Recently, though, she got in a mysterious accident that seems to have taken a lot of her memory and a good chunk of her mind as well. Now she cooks.

I was talking with an incoming freshman who has a lot of really great fully-rendered images..... and I felt bad that I didn't have any. :( So here's my attempt at it! Backlighting EVERYWHERE.
Posted by Arythusa at 3:56 PM 1 comment: 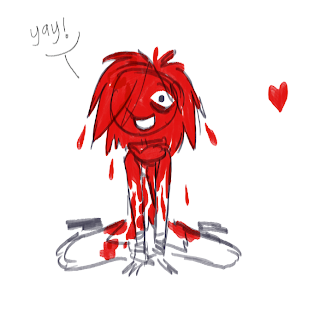 Although it would appear that someone is.
Mr. Hyde is a cute serial killer. :3 Yes you is. YES you is!
Posted by Arythusa at 4:28 PM No comments: