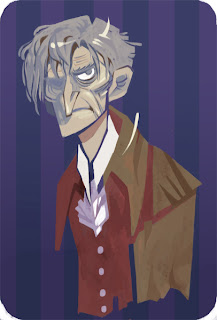 This was a small commission and I think it marks really the first thing that's been decent since I got back from Italy because well, the girl it was meant for liked it. XD Actually I like it too, as I am prone to do of anything new, but he does look a lot like Muntz, doesn't he? I really like Muntz (one of my favorite Pixar villains, I think), but I don't like the prospect that every skinny old guy I draw is likely to turn out looking like him. D: 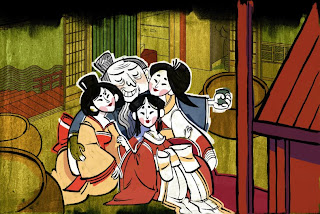 Well, here's a kind of fat old guy?
A preview from the Japanese music video I'm working on, although really I'm beginning to lose confidence a little.... :x The idea was that I would focus on the design aspect and have more of a "moving image" rather than real animation. That's because the whole thing is 4 minutes long--originally it was a relatively small segment of animation and the rest was footage, but the situation has shifted rather out of my favor in that department. :x

I'm doubting my ability to do a proper job in the time allotted, and I'm wondering if it's going to pay off in the end. This leads to all kinds of troublesome contemplations.... am I wasting my summer? What am I supposed to be doing with summer, actually? What do most people do with summer? Why can't I think of anything better to draw (seriously)? To make matters worse I'm supposed to be seeing Thief and the Cobbler (Recobbled) with a friend this weekend, which is not exactly a movie that tells you, "Hard work will pay off in the end." (Well, not the movie itself, but the drama surrounding it.)
Posted by Arythusa at 12:42 PM 2 comments:

I hadn't had the energy to draw at all. :( It's awful. Plus, just coming back from vacation, I had a lot of time to stew over what I'm not very good at. A lack of confidence seems to have driven back my design sense into the STONE AGE. . . . I finally drew a little today, but I couldn't hit anything on the nose, like "Ah! That's how I want it to look!" 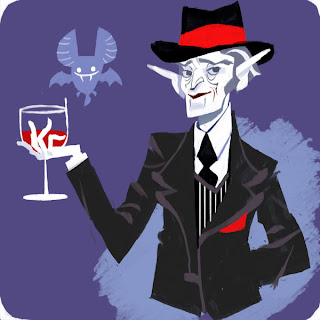 Oh btw, it's a creepy old vampire. :P And little Former, a much younger vampire, in cute bat form!!

I was rethinking an old character I had.... an old, very traditional vampire named Mr. Wilson who is like a mentor to little Former, who is so awkward he can't get close enough to a human to suck their blood. Wilson's new incarnation is an old classy charmer . . . however, on this first pass I'm getting a bit too much gayness. 8|
Posted by Arythusa at 9:56 PM No comments: